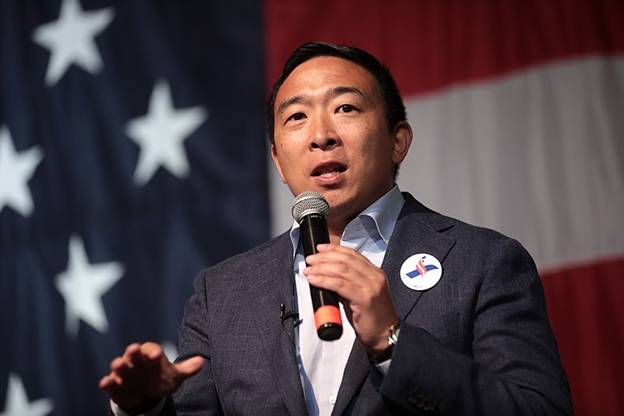 “Against the practice,” was Andrew Yang’s response when asked by a supporter whether he supported infant circumcision during the 2019 Democratic Party Presidential Primary campaign.

“From what I’ve seen, the evidence on it being a positive health choice for the infant is quite shaky,” he elaborated. “It’s sort of pushed on parents in many situations.”

He explained that at first he’d wanted to circumcise his sons out of fear they’d be self-conscious later in life, but his wife talked him out of it. “I’m highly aligned with the intactivists,” he went on to say. “History will prove them even more correct.”

Yang was a rising star during his campaign. Most noted for his plan for universal basic income that would pay every American $1,000 per month, he gained a significant amount of popularity due to his middle-of-the-aisle rhetoric that combined progressive policies with a bigger focus on working middle-class Americans.

While Yang didn’t make it far in the Presidential primary, he’s become increasingly involved in politics. Most recently, he announced that he’s running for Mayor of New York City. Unfortunately for him, his comments about circumcision mean he’s facing an uphill battle. Why would supporting the human rights and body autonomy of innocent babies hurt his political career so badly?

Voting blocs are groups of people that tend to all vote the same way. This may be due to one or two specific issues that affect that bloc.

Since many Cubans are or have descended from refugees fleeing the oppressive Castro regime, they have historically supported the embargo against Cuba. The power of their voting bloc has meant Presidential candidates on both sides have had to support the embargo for decades, even though the majority of Americans have been in favor of re-establishing diplomatic relationships with Cuba since at least 1974.

In the case of circumcision, the main voting bloc that controls the issue is the Orthodox Jewish population, which is mostly concentrated in New York. Incidentally, this is where Yang is from and where he’s running for mayor.

The Orthodox Jewish community is very clear about their position on circumcision. They consider it part of their religious tradition and regularly accuse anyone promoting a circumcision ban of being anti-Semitic. They certainly wouldn’t give an anti-circumcision politician their votes.

Naturally, this voting bloc did not appreciate Yang’s comments on circumcision. In an interview with the New York Post, Philip Sherman, an Orthodox Jewish Cantor who has performed circumcisions for over 40 years, said, “If you’re trying to garner votes among the liberal Jewish community and especially in the Orthodox community, you can forget it. You can take that whole bloc out.”

Similarly, Mendy Mirocznik, a Staten Island rabbi, told the Post, “I can tell you from a religious and multicultural standpoint, this can be taken in a very negative light. I hope that such comments like this do not cause the flame of anti-Semitism to be ignited even further.”

What the Political Situation Around Circumcision Says About American Culture

The important thing to realize is that voting blocs can only have this kind of power if their passion for a certain issue is orders of magnitude higher than the general public.

For example, Cuban-Americans have historically only been able to control the US’s Cuban diplomacy because they cared a lot about it, while most other Americans were more or less indifferent. As a result, the average American would still vote for a given candidate who aligned with their stances on other issues even if they disagreed with their stance on the Cuban embargo.

Meanwhile, the issue of the Cuban embargo is only make or break for Cuban-Americans.

In this case, what does it say about the American cultural and political climate that led to Yang’s anti-circumcision stance hurting his political career so much?

In fact, it hurt it so badly that Yang ultimately had to backtrack. “I believe in religious freedom. [Circumcision] is every parent’s personal decision and not a role of government,” he said in a tweet.

Of course, this shows how adamant the Orthodox Jewish community is about preserving circumcision, but this is to be expected. What’s more shocking is it shows how little the general US population cares about the issue. Indeed, the average voter seems to put a whole list of much more trivial issues far above the ritual mutilation of children.

Furthermore, suggesting banning an archaic and barbaric religious practice that betrays the human rights of infants is not antisemitism. It’s pro-human rights.

United States politicians have not only suggested that current religious practices in some communities are unethical, they’ve also passed laws against it. In fact American communities that include naturalized immigrants from African countries, parts of Asia, and the Middle East, have all had their religious practices that include circumcising female babies banned in the United States.

This includes “nicking” – which is only a small nick in the clitoris. According to Brian Earp, Associate Director of the Yale-Hastings programme in ethics and health policy at Yale, most people who are opposed to FGM don’t even realize that the majority of cases (90%) of FGM worldwide are less invasive, remove far less skin, and remove less genital function than the male form of circumcision.

“WHO defines FGM as any ‘non-medical’ alteration of the genitalia of women and girls. What this is likely to bring to mind is the most extreme version of such ‘alteration’, which is the excision of the external part of the clitoris followed by a narrowing of the vaginal opening, sometimes using stitches or thorns. It is rarely understood that this notorious form of FGM is comparatively rare: it occurs in a subset of the practising communities, and makes up about 10 per cent of cases worldwide.

More prevalent, but much less frequently discussed in the media, is a range of less extensive alterations, sometimes performed under anaesthesia by medical professionals and with sterile surgical equipment. These include, among other interventions, so-called ritual ‘nicking’ of the clitoral hood (common in Malaysia), as well as non-medically-indicated labiaplasty and even piercings that might be done for perceived cosmetic enhancement.”

As intactivists, Andrew Yang’s story tells us that our first obstacle is actually making the general public realize what a serious issue this is.

We have to make bodily autonomy a priority, regardless of the gender of the victim, a major political issue. Maybe then, small voting blocs will no longer be able to control the conversation, and millions of American boys will no longer be subject to mutilation, torture, and lifelong body modification, without their consent.

How to Identify and Avoid Feminist Movies...

Why More Masculinity Is Actually Healthier For...