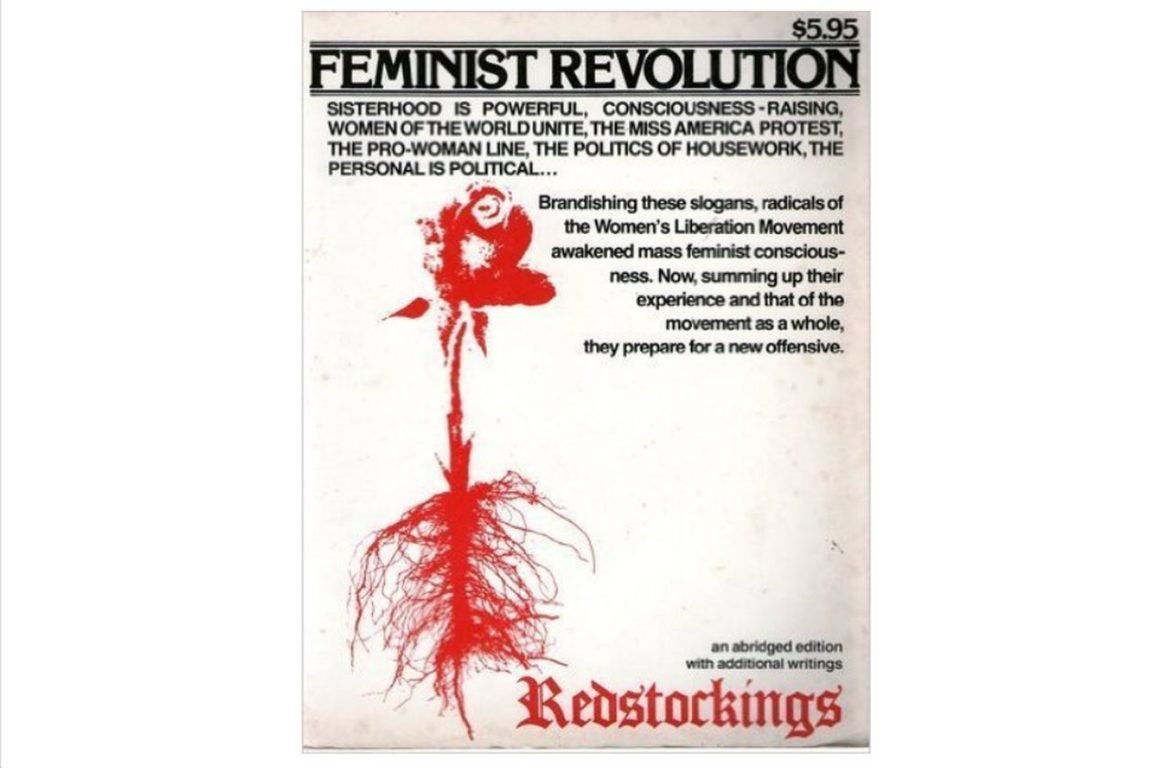 We’re all familiar with the modern TERF wars – the internal struggle within the feminist movement over whether the political category of women should be reserved for those biologically female and whether transphobia is a form of misogyny, or something entirely different.

The disconnect between radical feminists and liberal feminists is much older than trans exclusionism, however. This article will explore a particularly interesting historical anecdote from the 1970s that saw a radical feminist collective actively censored by Gloria Steinem via the Random House publishers and their subsequent battle to expose her as politically compromised; and traditional ideological differences between the two sects.

Random House and The Redstockings

In 1978, Random House published a book by rad-fem collective, The Redstockings. “Feminist Revolution” was a collection of articles and essays recounting and analyzing the rebirth of the women’s liberation movement that had begun in the 1960s and calling for “a new offensive”.

Key issues in the book included sisterhood, the personal as political, criticism of the Miss America contest and “the politics of housework”. But in response to legal threats of libel action, a piece detailing Gloria Steinem’s organizational position within the – CIA funded – Independent Research Service was pulled from the publication.

The battle did not begin in 1978. The Redstockings were attempting to discredit Steinem as early as 1975, when they issued a press release charging Steinem with a decade long association with the CIA between 1959-69, with subsequently “covering up” the truth – and with “endangering the feminist movement”.

According to their investigations, despite denials, Steinem had engaged in collecting names and dossiers on radical left wing and feminist activists as part of her work as a Director for the Independent Research Service, funded by the CIA. Work, by the way, recorded by “Who’s Who in America” in Steinem’s first listing in 1969 as a full ten years. This was then reduced in subsequent editions – to three years. Then to one year, before disappearing altogether.

Furthermore, they alleged that Steinems’ journalistic career and Ms. magazine were launched by a Mr. Clay Felker, who worked as an editor of “a newspaper published by this CIA front” (the Independent Research Service).

The Redstockings belief was “that one major CIA strategy is to create and support ‘parallel’ organizations which provide an alternative to radicalism.” They also feared that Ms. itself was a front for collecting information on feminists in the U.S.

Steinem Admits Working for the CIA

Steinem and Ms. were eventually pressured into responding to the press release, several months after its publication. They admitted that Steinem had worked for the Independent Research Service – and that the organization had received some funding from the CIA – but rejected the conclusions that The Redstockings had drawn.

Steinem insisted that “I took no orders from the U.S. government in any of its forms or agencies. For better or worse, I have always been my own person.”

Steinem suggested that The Redstockings anonymous status was suspicious; and both her and Ms. alluded to Marcarthyism, with Ms. claiming that:

“The parallel seems exact: popular paranoia that settled on communism in the fifties may now in the seventies settle on the CIA.”

In recent years, Steinem has implied a closer relationship did in fact exist between her and the CIA, saying:

“In my experience The Agency was completely different from its image; it was liberal, nonviolent and honorable.”

It is not clear to me that the legal threats she and her cohort threw at The Redstockings in 1978 could be described quite so laudably.

The Redstockings Accuse Ms. Magazine of an Anti-Woman Ideology

An additional criticism made by The Redstockings of Ms. was that the magazine:

“…is putting forth an anti-woman ideology that says to women they are inferior and damaged. It is promoting token women, wonder women and ‘role models’, and denigrating the real achievements of most women.”

This is typical of rad-fem critiques of liberal feminism. In the book Feminist Revolution, Brooke writes about an impasse in the women’s movement. She posits that this is “due to a deradicalizing and distortion of feminism which has resulted in, among other things, [what the author terms as] ‘cultural feminism.'” Brooke goes on:

“The militant women who created the Women’s Liberation Movement based their organizing work and theory on the premise that all women are oppressed as women and that personal liberation was impossible. The concept of ‘the liberated woman’ or ‘the liberated lifestyle’ was disproved by the radical, feminist analysis of the common oppression of women as a class. The locus of women’s oppression, therefore, is not culture but power, men’s class power…

Another theory, increasingly pushed as feminism itself grows, absolves men from any but psychological responsibility (if that) for the oppression of women and blames it all vaguely on ‘sex roles’ or ‘society’… This theory, by promoting a ‘Sex Role Revolution’ instead of a real feminist revolution papers of class antagonism between men and women and substitutes cultural change for power change. It has generally replaced radical feminism as the ideology of most of the women’s movement”.

Radical feminism does not see oppression in traditional women’s roles – they see oppression in what they see as a lack of respect for those roles, and very commonly in the failure of the state to systematically provide the generous financial remuneration to women who perform those roles that rad-fems see as appropriate.

To the radical feminist, a liberal-style “liberated woman” who succeeds in a male dominated or traditional male role is a class traitor.

In The Radical Future of Liberal Feminism (1981), Zillah Eisenstein agrees with Brooke’s idea that the women who created the Women’s Liberation Movement based their theories on the radical idea of women as an oppressed class and men as oppressors.

She explores the historical record and finds that feminism has its roots in the 18th century liberal concept of an independent and autonomous self, and shows how thinkers like Mary Wollstonecraft (who identified women’s “miserable situation”) and Elizabeth Cady Staton (who criticized “the aristocracy of men”) developed liberal philosophy in a radical direction by perceiving that women, as a sex class, were excluded from liberal citizen rights.

Eisenstein then goes on to suggest that the appeal of liberal feminism lies in the liberal individualist consciousness that modern Western women are born into; and that their follies lie in accepting the idea of the possibility of sex equality within a liberal system, and demanding only what they see as politically feasible, which in fact requires accommodating the “patriarchal state”.

In Eisenstein’s opinion, liberal feminism is a tool that the state uses to “protect the status quo from women’s demands” while professing its commitment to women’s equality despite, in reality, upholding a patriarchal system, the shifting of which “may reflect formal rather than real gains for women”.

However, Eisenstein identifies radical tendencies within liberal feminism which she believes are capable of being the basis for revolutionary change. She sees the demands of liberal feminists as being subversive and challenging to a dominant patriarchal ideology – but also as ultimately insufficient.

She doesn’t want to see women made men’s equals (she rightly asks: “which men?”). She wants the entire structure smashed and rebuilt in a radical fashion because, she believes that, “feminism cannot be met by a liberal state”.

Patriarchy Theory is a Radical Delusion

I agree with Eisenstein. There are radical tendencies within liberal feminism. The very concept of modern Western civilization as being based on “patriarchy”, on which rad-fems and lib-fems concur, is an utterly radical delusion. It’s a delusion that requires either cherry picking evidence to support the idea.

It’s an idea that’s demonstrably false when you include the bottom strata of the social hierarchy (predominantly men) or if you explore the evidence on preferences (that show that the very particular executive-political and financial power are minor priorities for many men, and more women).

What I find curious though, is that if truthfulness and freedom are key tenets of liberalism, it appears to me that rad-fems (with all their scorn for the liberal systems they see as archaic) are more liberal than the liberal feminists who pretend not to see evidence, and censor their less palatable sisters who disagree with them.