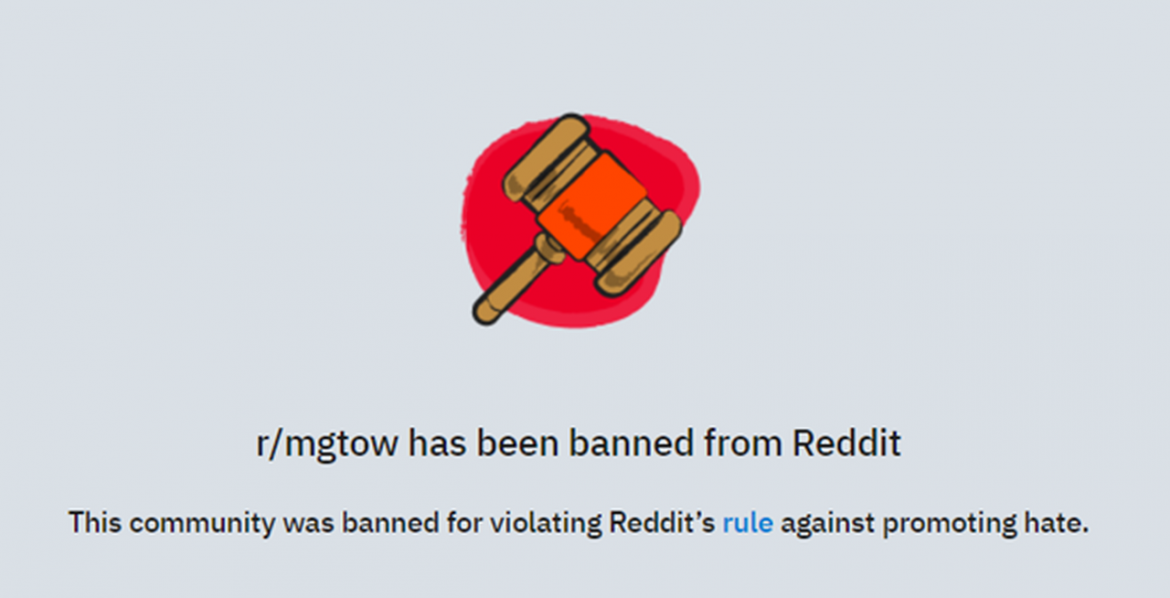 On Tuesday, August 3 of 2021, the popular social media site Reddit banned r/MGTOW, a “subreddit” dedicated to the MGTOW (Men Going Their Own Way) philosophy. According to Reddit, the group was banned for “violating Reddit’s rule regarding hate.”

The rule in question states, “Communities and users that incite violence or that promote hate based on identity or vulnerability will be banned.”

r/MGTOW was a quickly growing subreddit, up to 104,000 members in 2019 from 54,000 in 2018. As a result, the ban has caused considerable debate on Reddit and the Internet as a whole. Most importantly, it has even brought up demands for banning other men’s rights groups like the subreddit r/Men’sRights.

This is no idle concern, and it’s worth considering what r/MGTOW’s shutdown means for men’s rights. Not just its presence on the Internet, but the cultural attitude towards it in general.

MGTOW stands for “Men Going Their Own Way” and is a philosophy that advocates for men separating themselves from women, specifically by not engaging in romantic relationships with them. To a lesser extent, it encourages men to remove themselves as much as they can from society at large, which they consider to be largely gynocentric.

MGTOW originated with a manifesto published on the blog No Ma’am in 2001. While it has a few somewhat prominent figures, mostly on independent blogs or podcasts, there’s no leadership or central authority. Nor is there any way to gauge the true number of its adherents. Other than the subreddit, there are many other popular MGTOW forums, some with tens of thousands of members.

When they banned r/MGTOW, Reddit cited a study in MIT Technology Review that tangentially linked the group to violent “incel” attacks. Indeed, MGTOW is even listed by the Southern Poverty Law Center as a hate group under an ideology of “male supremacy.”

Is MGTOW the Same as Men’s Rights?

Regardless of MGTOW’s faults, it’s unfortunate that Men’s Rights is frequently lumped in with that particular movement because they are simply unrelated.

Nevertheless, groups purportedly concerned with discrimination against women frequently group the two together, along with other groups like “incels” and the Red Pill, into the general “manosphere.” It’s blatantly absurd that vastly different groups that not only have very different and often contradicting ideologies about the male experience are grouped into one single movement.

Yes, there’s occasional overlap between members of one group and another, but how is that meaningful? There are feminist white supremacists. In fact, feminism has many of its roots in white supremacy. Does that mean feminism should be placed under the umbrella of white supremacy? Does it mean that every time a self-identifying feminist posts “kill all men” that all feminists are female supremacists and part of a hate group? Feminists always say no to this question, even though they use the exact same “feminist” label as those who espouse gender-based hate.

In fact, Reddit seemed to purposefully misinterpret the very MIT study they were citing, which states outright:

“Over the past 10 years, the population of men identifying as men’s rights activists and MGTOW—traditionally older and less violent—is falling while younger, more toxic PUA and incel communities have seen a spike.”

In other words, the hate crimes that Reddit and other communities want to stop come from groups such as “incels,” not MGTOW, but it’s viewed as some kind of stepping stone to radicalization. Unfortunately, those in power seem to want to make the same connection for the Men’s Rights movement.

This connection is tenuous at best. When there’s a Neo-Nazi terrorist attack, it matters little if the attacker was once a Republican, a member of the NRA, a military serviceman, or part of his local Rotary club, even if those things seem marginally statistically related.

They simply aren’t the same, just like Men’s Rights is not the same as MGTOW and certainly not the same as incels. If people were committing hate crimes or advocating mass misogyny in the name of “men’s rights,” I’d be the first to renounce the title and choose something else, but I have not seen that to be the case.

Society’s History of Not Letting Men “Go Their Own Way”

It’s worth noting that the philosophical principles behind MGTOW have long been anathema in Western society. People of both genders who have refused to settle down with someone of the opposite sex, whether it’s to be alone or with a partner of the same sex, have been vehemently stigmatized. Think hermits and spinsters.

In fact, in the case of men, it’s even been made a legal issue in some jurisdictions. Bachelor taxes have existed in many parts of the Western world, penalizing men for not getting married. In this way, society pressures men to support a wife and family.

There’s no doubt that this was at least partially at play in the decision to ban MGTOW. Simply refusing to marry and settle down with a woman is automatically “misogynistic” because women apparently deserve that support. As you can see from the historical examples, this is an unconscious cultural assumption and similar to mass cultural homophobia. Men must play their role as husband and provider, or else suffer the social consequences.

This subtle cultural bias is most likely why a company like Reddit can so readily display a double standard when it comes to banning “hate” subreddits. I don’t doubt that there was some misogynistic content in r/MGTOW, but there is also horrible misandrist content all over Reddit that’s posted with impunity. An easy example is r/FemaleDatingStrategy, which even has a Wiki describing their ideology with points such as:

While we believe in having your own career and making your own money, a man still has to add financial value to your life and make you feel like he can take care of you. This means not splitting the bill and not dating financially challenged men.

There is little difference between this rhetoric and that found on r/MGTOW. It’s certainly more hateful than anything posted on r/Men’sRights, which focuses mostly on men’s issues alone, like male genital mutilation, the boy crisis in education, and discrimination against men in family and criminal court. Yet these misandrist subreddits remain untouched, and this rhetoric is allowed openly on all social media platforms and in our society at large. In general, misandry is hardly called out at all for the obvious gender-based hate that it is.

For now, r/Men’sRights remains open, but hopefully the banning of r/MGTOW does not further give way to silencing anything related to men’s interests simply because of the actions of totally unrelated groups. Men’s issues deserve a place to be heard. Allowing blatantly misandrist groups to continue publishing hate while shutting down activists fighting for true gender equality would be a tragedy indeed.

Cosby’s Release Doesn’t Prove Patriarchy, but the Reaction Disproves It

4 Forms of Sexism Against Women That...