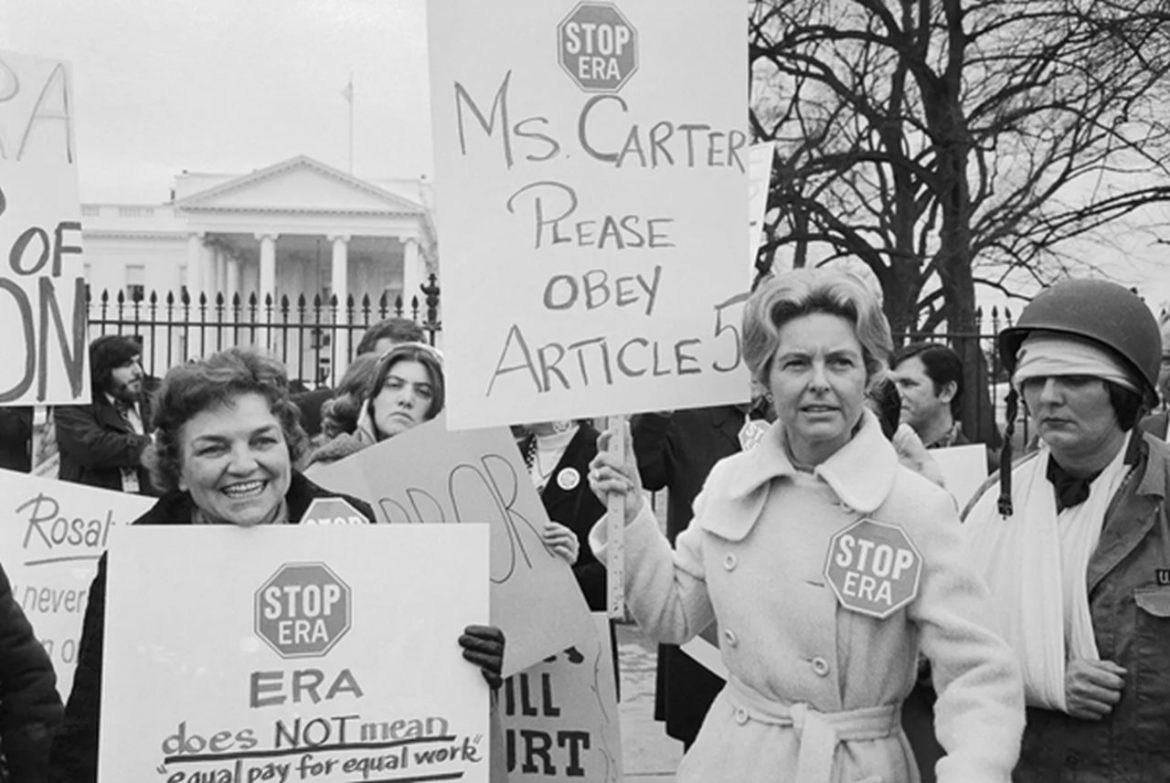 In 1923 suffragist Alice Paul introduced the Equal Rights Amendment, or E.R.A for short. The amendment consisted of a short and concrete sentence, which stated: “Equality of rights under the law shall not be denied or abridged by the United States or by any state on account of sex”.

E.R.A was intended to provide genuine and legitimate equality to both males and females, and the National Organization of Women pushed hard for it to be finally approved in 1970.

Many would agree that women of that time would see this amendment as an immense step towards equal opportunity and fairness for all.

Surprisingly, this change was opposed by the leader of the Stop Era Campaign – Phyllis Schlafly and many other females who unfortunately succeeded at attacking the amendment, to its demise.

What E.R.A Offers and Why We Need It

The Equal Rights Amendment will provide solid and legitimate protection from discrimination, regardless of gender. It’s that simple.

Even in this century, the only right that the Constitution firmly applies and acknowledges equally for both genders, is the right to vote. People might argue that the USA already has laws that administer equality (for example, The Equal Protection Clause of the 14th Amendment). However, very often laws are differently interpreted and discrimination against both females and males are still in motion.

Courts in various states can still tip toe around legislation, without being in violation of the Equal Protection Clause, as long as it’s decided that exclusive treatment is necessary in order to achieve a “proper” ruling.

Not only that, but Congress has the power to revoke any law it sees unfit, and often political parties can change their beliefs and values around gender-bias, if it’s in their own interest.

E.R.A will impact these malpractices, as it executes a non-biased and a very straightforward concept – guaranteed equality for ALL of the American people regardless of gender. It will impact how the government distributes resources for both women and men, and will abolish endeavors in which gender is considered a prerequisite.

The Equal Rights amendment is vital for all aspects of life, not only for women, but men as well, who have been wrongfully neglected in divorce, child custody, abuse and harassment, and severely discriminated against by the U.S. Selective Service system.

This amendment may not change the world in one or two days, but it is a necessary building block that will pave the path for future freedoms of humanity as a whole.

Why Has E.R.A Not Been Ratified?

In 1970, E.R.A was approved by The House and after just three years thirty states had already ratified it. For the amendment to be fully recognized, thirty-eight states had to formally approve it. Feminists of that era all around were celebrating, as this was originally viewed a huge step for true civil rights and democracy.

One woman was not celebrating. On the contrary, she started an anti-ERA movement, with the intention of eradicating it.

Her name was Phyllis Schlafly and she told journalists: “A woman should have the right to be in the home as a wife and mother.”

Phyllis was from the working class, and even though she had a law degree, she argued that women already were protected and had all the rights they needed. Schlafly was also a political activist and even a vice president at the National Federation of Republican Women.

She was a smart person and used people’s strongest emotion – fear, in her battle against the amendment. She successfully invoked doubt, by catastrophizing every situation, she saw useful.

One of her prominent weapons was to place signs on little girls, which stated “Don’t draft me”. Her understanding was that once the E.R.A was accepted; women will be most surely sent to the trenches. She rightly recognized laws that were sexist toward men, and would likely come under scrutiny if the E.R.A. was ratified. However she used the the concerns of a gynocentric society (traditional need to protect women’s lives and health) against those pushing for equality.

Phyllis Knew How to Scare a Gynocentric Society

Phyllis advocated that the amendment would normalize abortion, same sex marriage, and would remove all privileges and protections women had in their homes by their husbands.

The belief that women had all the support they needed already, and that the E.R.A would diminish this, was strongly rooted in her claims. In her mind, husbands would no longer have to provide financial support after divorce, laws against sexual assault would be abolished, and women would be forced to provide for their own families. She was a firm supporter of the traditional female role in society.

Schlafly’s ferocious campaigning established a strong female opposition to the E.R.A. Many of these activists were homemakers and believed that the amendment would remove their rights as homemakers, and would push them out into the job market, for which they didn’t have the proper skills. They believed this would inevitably sweep them under the rug and onto the streets, without financial stability.

Grassroots women were campaigning on the streets and even in churches. The Equal Rights Amendment didn’t stand a chance. The requested majority of 38 states was not met, and E.R.A was not ratified after meeting its deadline in 1979.

There Is Still Hope for E.R.A.

Despite the failures of the past, there is still hope. Virginia has been the 38th state to approve the Equal Rights Amendment in 2020, and we can still achieve what we lost.

However, the path will not be easy. Congress still must remove the deadline, which already passed, and to acknowledge the other states decision to ratify the amendment. We have a long way to accomplish this but bearing in mind that the current American population is positive towards .E.R.A, maybe we can finally achieve what we all want.

This is a huge chance to eradicate any gender predispositions and to establish a Constitutional order, in which all people have the right to achieve, prosper and protect their own rights regardless of gender.

The entire purpose of the E.R.A., like any other civil rights amendment, is to provide constitutional protection for everyone against discrimination, without bias.