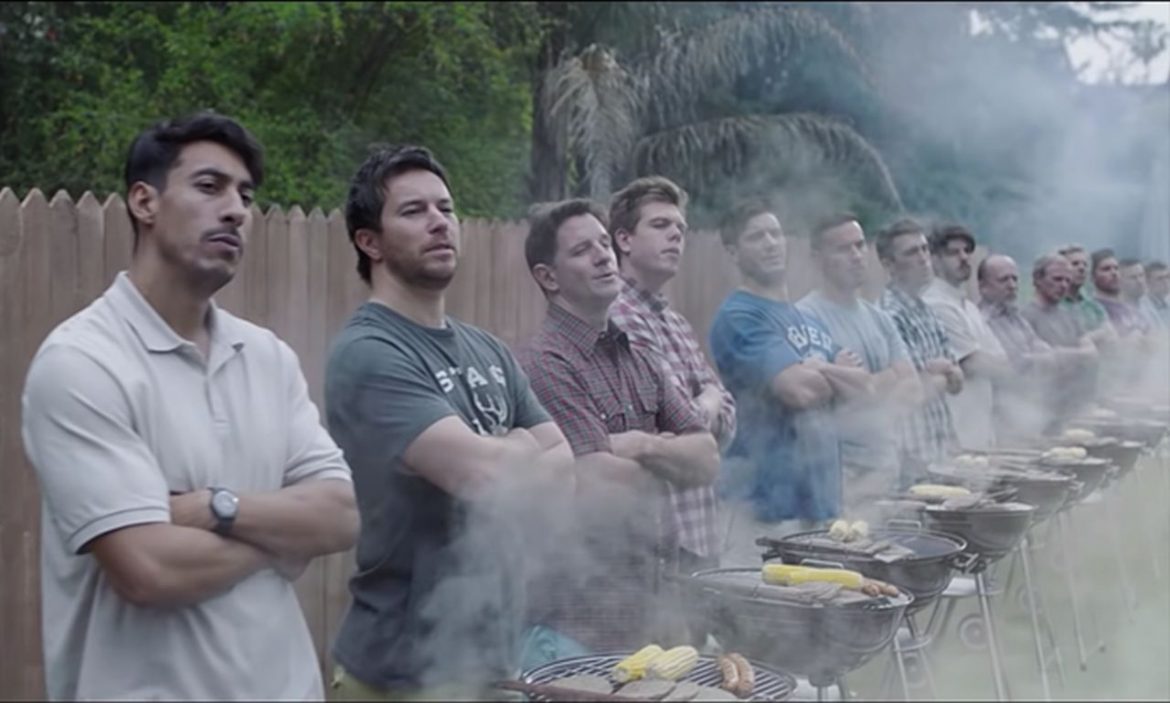 You hear quite a bit about how advertising uses sexism against women to sell products, but the fact that marketers equally like to use sexism against men goes largely undiscussed. It’s just as prevalent, though (if not moreso).

To give you an idea of its ubiquity in the media, these are six of the most sexist ads out there that stand out for their sexism against men.

Coming in at number one is the infamous Gillette commercial that decides to demonize masculinity and suggest that the cultural tradition of “manhood” is to blame for a number of societal ails, including bullying and sexual harassment. I won’t go too deep into this ad because it’s been addressed repeatedly and is well accepted as just about rock bottom when it comes to misandry. Nevertheless, I’ll point out some of the more obvious sexist aspects of the Gillette ad.

First of all, it shouldn’t take much stretching of the mind to realize that telling “men” as an overarching group to change is sexist whether you associate a given behavior with masculinity or not. For example, let’s take the extreme example of rape, which was only tangentially addressed in the ad through mention of “MeToo” and is indeed a crime perpetrated more often by men against women (although the opposite is not uncommon).

Now, take a reverse example. Women lying to men about their paternity is an offense exclusively committed by women against men. Yet surely we would all recognize that an ad telling women to grow and be better filled with dramatized images of women hiding who the true father of their children is would be incredibly sexist.

Second of all, many of the bad behaviors betrayed in the ad don’t have anything to do with masculinity in our culture at all. For example, a significant portion of the ad is devoted to bullying. Last I knew, both boys and girls suffer horrendous bullying from other girls. Suggesting it’s a “men be better” issue is terribly sexist and grossly inaccurate.

Lastly, a lot of the behavior portrayed negatively in the ad isn’t really even negative. Boys wrestling on the ground? A man going to talk to an attractive woman on the street? This is the behavior Gillette wants to demonize, but this behavior doesn’t hurt anyone and is arguably good and natural for boys and young men. It sounds like cultural stigmatizing of traditionally male behavior simply to make men feel ashamed, which is definitely sexist.

Luckily, the Egard watch company came out with a beautiful response ad that ended up getting even more views.

In 2015, T-Mobile ran a Super Bowl ad starring Sarah Silverman and Chelsea Handler that left many viewers speechless. It wasn’t until afterwards that we all went to YouTube to see if we’d actually heard what we thought we did. Indeed, Sarah Silverman, while touting the coverage in her “underground delivery room” gives two new parents their baby and quips, “Sorry, it’s a boy.”

Sarah Silverman is an openly radical feminist, so there’s not much debating what she was trying to say. It doesn’t take a whole lot of analysis to understand why this is sexist, but I’d primarily like to point out the dehumanizing attitude this promotes. In other words, this person, an innocent newborn baby no less, has no value according to Silverman, simply for being a boy.

Never mind the fact that Chelsea Handler and Sarah Silverman are both incredibly rich celebrities getting paid millions to act in a 30-second commercial in which they quite openly flaunt their wealth. Altogether, it’s one of the most tone-deaf ads of the past decade.

I’ve seen a number of articles out there where feminists criticize sexist ads of the 50s or 60s by reversing the gender roles. Often these ads truly portray domestic violence against women.

What I’ve always found ironic about these articles is that modern feminists have to sift through very old ads to find this sexism. By contrast, you can simply look at modern ads to see ads promoting domestic violence against men.

In Dannon’s 2012 Super Bowl ad for Oikos yogurt, the female actor violently grips and headbutts John Stamos until he’s incapacitated on the floor for “standing between her and her Oikos.” I guess portraying domestic violence is okay as long as it’s against men?

4. Vogue India’s “Start With the Boys”

Back in 2014, 10 years before Gillette came out with their sexist ad in the US, Vogue India produced a very similar ad, which they called a “short film.” In fact, many have suggested this was the ad that inspired the Gillette commercial as they both have similar tones and condescending messages.

In the ad, a boy grows up constantly being told by others that “boys don’t cry” until as an adult he abuses his partner. A spokeswoman then comes on to say, “We have taught our boys not to cry. It’s time we teach them not to make girls cry.” Apparently, the gender-based social pressure boys experience is only bad insofar as it ends up affecting women. The ad just further reinforces how little society cares about the male experience.

Furthermore, the ad seems to blame men for the female experience while simultaneously ignoring the female role. In fact, in the ad itself, it’s first the mother telling her son not to cry, yet in the end, it’s a male problem only.

Philadelphia actually came out with an ad that was ultimately banned by the British Advertising Standards Authority, or ASA, for being sexist by reinforcing gender roles or portraying an activity as more difficult for one gender over the others. Specifically, the ad shows two new dads getting distracted by bagels with Philadelphia cream cheese and thereby accidentally leaving their babies on the dish conveyor belt.

Honestly, I would give this ad a pass if it didn’t end with the dads saying, “Let’s not tell mom about this.” The implication here is obviously that mom is one, the better parent, and two, in charge of parenting. This reinforces the stereotype of men as bad fathers that contributes to discrimination against men in family courts and in society in general, so it’s definitely sexist in that regard.

Like the Oikos ad, this one is another example of a dynamic people have complained about and satirized in advertisements for years, just with the genders reversed. If it’s wrong one way, it’s clearly wrong the other.

In this ad for Firestone tires, a woman comes home to find her partner has been taking a nap instead of doing the chores she presumably wanted done. In retaliation, she runs over his video game console, proving the toughness of the tires, a pretty low bar in my opinion.

Never mind that property damage could arguably be considered domestic violence or abuse, just consider the power dynamic of this relationship. Imagine an advertisement where a husband comes home and, finding his wife hasn’t made dinner, destroys her phone. Firestone’s sexism is obvious.

Just the Tip of the Iceberg

There are hundreds of examples out there of ads that are sexist against men and would be criticized or even pulled from the air if the genders were reversed. For a deeper look, check out Vinny Mac’s YouTube playlist on misandry in the media. And next time you see a sexist ad, take note. Better yet, contact the company directly and call it out on social media for what it is. Disgusting, and sexist.

What Is Gaslighting and How Feminists Use...