Home Sexism What Is Virtue Signaling? And Why So Many Do It Today
Sexism

What Is Virtue Signaling? And Why So Many Do It Today 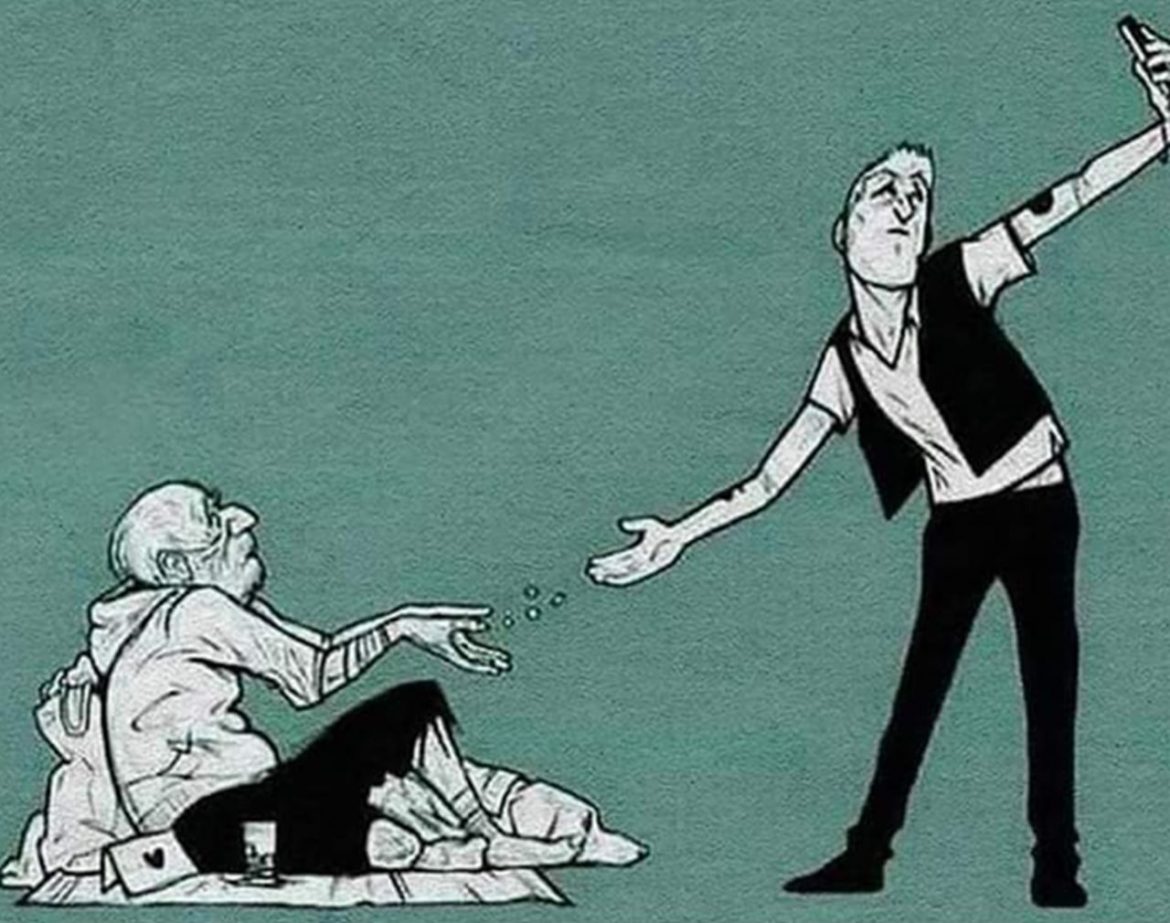 Ever seen one of those profile stickers on Facebook or Instagram? There are thousands. General ones like “Boston Strong” or “Thank You Healthcare Workers,” specific actions like “I Voted” or “I Donated to Alzheimer’s Research,” and even more abstract promises like “I Will Get the COVID-19 Vaccine.”

These may be entirely genuine attempts by their users to promote a cause or encourage a behavior they see as beneficial. More likely, though, they are at least in part attempts to impress their social circle. You’ve done it, I’ve done it.

Usually it’s a mix of both and probably harmless. Still, this phenomenon, commonly called “virtue signaling” can be destructive when it runs amok, as is currently happening in modern feminism.

What Is Virtue Signaling?

Virtue signaling is acting in a certain way to show the rest of society how “virtuous” you are to gain acceptance and approval.

For example, many people only donate to or volunteer for charity if there’s someone around to see it or they can broadcast it in some way. This is because they don’t actually care about the charity or its cause, they just care about the social currency they can gain by supporting it.

This is why ethical philosophers for millennia have been advocating for doing our good works in secret. This ensures those acts are genuine.

Virtue signaling is so common because humans have a strong desire to be part of and valued by a tribe, and virtues or morals are a major part of what defines tribes. Large societies usually have specific moral values or at least put larger emphasis on different morals.

The Cultural Need to Prove Virtue

For instance, Far East societies have historically emphasized purity more than the West which has historically emphasized individualism more than the Far East. To fit in, an ancient Japanese person would have needed to prove that they actively followed this purity virtue to “fit in” and be accepted while an ancient European person needed to prove their independence and unique contributions.

Modern society, however, is very complex, and people end up trying to find tribes within tribes within tribes. For example, even Western society readily divides into tribes on the Left and Right of the political spectrum, even though this distinction is basically arbitrary and tantamount to mythology.

Moral Foundations Theory, as developed by psychologists Jon Haidt and Craig Joseph, has found that humans have six main moral categories—compassion/harm, fairness, loyalty/ingroup, authority, purity and liberty—and that the Left and Right place different emphasis on these.

At the most fundamental, virtue signaling promotes social cohesion. It’s a way for someone to say, “Hey I’m one of you and not one of them.” However, humans don’t just form groups and tribes but social hierarchies as well. Naturally, virtue signaling plays a role in this too.

Depending on your level of ambition, you don’t just want to be valued and accepted by a group, you want to have power within it. Virtue signaling is a useful tool in this case. Instead of merely showing everyone that you’re a compassionate person, you show them you’re the most compassionate person and therefore better than them.

Of course, what’s an easy way to make yourself seem like the most virtuous person around? Make everyone else, your rivals especially, look unvirtuous. This is when virtue signaling becomes the most dangerous and destructive.

Ironically, those who so often profess their love for equality are the ones most obsessed with being above others socially.

Virtue signaling is arguably at all time highs, but that doesn’t mean it hasn’t run rampant during various historical periods, usually during revolutions and civil wars when the contemporary social structure is experiencing an upheaval and people are scrambling the best they can to be on top of the new one.

Communist and Marxist revolutions are great examples. In the end, the Republican cause in the Spanish Civil War fell apart because the various radical militias cared more about gaining the moral upper hand over their own comrades than actually defeating fascism.

People were constantly having to prove their loyalty in the face of accusations of being a “reactionary” or fascist sympathizer. Even famous socialist revolutionary George Orwell had to hide and escape from Barcelona when his virtue came under question. The experience would ultimately inspire his dystopian novel 1984.

Similar things happened during Mao’s Cultural Revolution in Maoist China. Young revolutionaries constantly tried to increase their social standing by outing others for being nationalists or reactionaries, even if these people were, in reality, fellow communists.

The same thing happened in the Soviet Union. At one point Stalin and the KGB even accused Leon Trotsky, one of the fathers of Soviet communism, or being a Nazi sympathizer. Of course, Stalin didn’t believe this or even care. He just needed to maintain his moral superiority by morally disparaging his opponents as he would continue to do throughout his infamous purges.

Unfortunately, social media have provided the perfect festering ground for virtue signaling. You can broadcast anything you want and pretend to support the most obscure issue with a simple status update or post.

Think back to Black Lives Matter protests that started in the wake of George Floyd’s death at the hands of Minneapolis police. Regardless of your political position regarding the incident and BLM, you have to admit that the online virtue signaling in the days shortly after reached unprecedented proportions.

First, you weren’t virtuous if you didn’t speak out. Then, speaking out was “problematic” because many told white social media users that they should be silent since the movement wasn’t about them. That evolved into the black square movement on social media, where everyone was supposed to post a black square and nothing else for an entire day.

Of course, articles quickly surfaced criticizing this for being “problematic” for one reason or another and advocating for some other course of action. Even more articles responded to those articles, which then received responses of their own.

No matter what you did, from absolute silence to aggressive activism, was not virtuous enough. It was a virtue signaling competition you couldn’t win.

Does this remind you of any of our historical examples? There is one primary difference, though. This escalation of virtue signaling happened within a matter of hours. You could watch it cycle up on social media in real time. In other words, social media have given virtue signaling viral influence.

Nowhere is virtue signaling more endemic than modern feminism. As much as feminists would like to believe they’re rebels fighting and resisting the “patriarchy,” feminism is the established political narrative and ideology in modern society.

It’s ingrained into our laws, taught in schools from a young age, and promoted constantly by large corporations, celebrities and the media. Just a few days ago I saw government posters peppering the subway in advocacy of “feminist politics.” Feminism has now become “the man.”

Since it’s the establishment, people have a big incentive to be accepted by it. That means virtue signaling. Of course, it’s not enough to just be accepted. Modern feminists want to rule the feminists, so they need to not only one-up each other but accuse others of being morally inferior and violating the holy virtues of feminism.

This feminist virtue signaling usually manifests as misandry. Part of this is simple one-upsmanship. In rapid succession, observations about gender proportions in STEM professions becomes complaining about how men sit on public transportation. See how much more you support women? You find inequality in even the most trivial of things.

However, a bigger part is virtue-signaling is putting other people down to lift themselves up. For example, if men’s issues ever got airtime, that would threaten their power. They’d no longer be the mainstream, established narrative. Therefore, they have to create a narrative where caring about men is “misogynist.” They claim the moral high ground and question the virtue of their opponents all in one swoop.

Unfortunately for them, virtue signaling is a big facade. It just takes a few of us to point out the emperor has no clothes, and it will all fall down. Feminists don’t care about equality, or they wouldn’t use something as dishonest as virtue signaling to keep men’s issues from receiving the attention they deserve.

Teach Your Kids Traditional Masculine Behaviors to Improve Their Future

What Is Cancel Culture and Why It Is So Dangerous for America?